Dan Baglione died today on his 87th birthday. I didn’t really know Dan, but we spent six days straight running around a one-mile loop together a few months before his pancreatic cancer diagnosis. 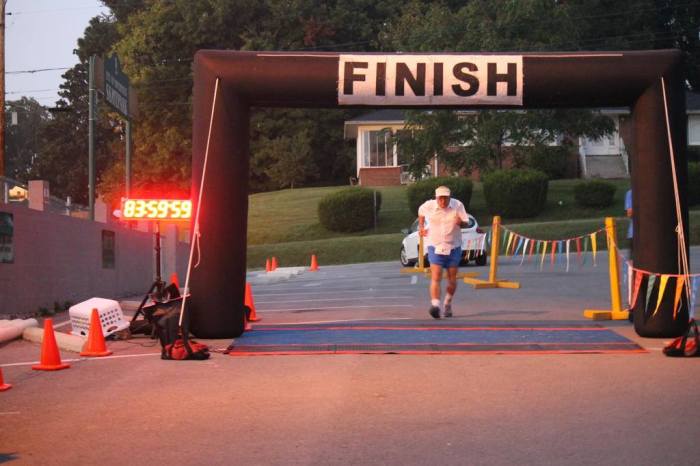 Dan Baglione sneaking in mile 101 at the last second of A Race For The Ages (2015) the day before his 85th birthday. (Photo credit: John Price)

Death is tragic when someone with great potential for life is robbed of the chance to see that potential materialize into something wonderful. Generally, old people dying is not considered terribly tragic because they’ve already had their chance to live a happy life and do something wonderful. In death, they finally succumb to their natural deterioration, which is often a state of prolonged discomfort, hopefully with a fulfilling life to look back on. Sure, Dan was an old man who lived a rich life. The reason his death today struck me is because he still had overwhelming potential to inspire and accomplish great things.

When he was 85 years old, Dan became the oldest person ever to compete in a six-day race and he threw down a solid 183 miles. Do (or did) you have someone close to you who is that old? Can you imagine that person hoofing it around a track for 144 hours straight, let alone just standing up unassisted?

Heck, people my age (30 years old) are starting to fall apart. Young people succumb to inactivity, perhaps due to the cultural pressure to prioritize career over everything else or whatever its cause. Maybe ultra running does ruin your body, I don’t know. But, seeing Dan happy as a clam despite some under-carriage chaffing in the middle of a six-day race makes me think he was doing it right.

Sponsors tend to recognize and promote the young and the fast. But ultra running is bigger than sponsors and I love that this is something that we all deeply appreciate, including those sponsored elite athletes. Ultra running is a tight community of weirdos that values the importance of recognizing all of its members — superstars, old geezers, and everyone in-between. Old people need role models, too, and Dan is their man.

One thought on “Old People Need Role Models, Too”