I scored a 1 (out of 5) on my Advanced Placement test for the French language in high school. If you put your name on the test you get a 1, but no matter. “I’ll never need French in the real world,” I thought, and the same goes for Math while we’re at it, right? Yeah! Removing Math from public school curricula happens to be my main campaign platform. Greg for POTUS 2016. 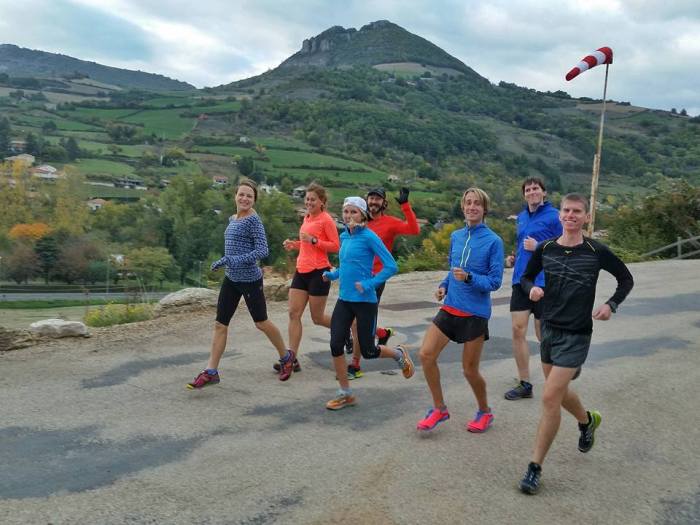 The roadie running with the rockstars in a pre-race “shake out,” though I found the pace to be a little brisk!

There I was, at the start line of the Les (redundant?) Templiers 100 km race wondering if I needed to check in somewhere. “Est-ce qu’il y a un papier pour moi signer mon nom parce que je suis ici pour la course?” Hell, I even practiced that line on my walk down to the race start. I delivered it as best I could, but I suspect it came out something like this. After some confused back and forth, the volunteer handed me a blank envelope and I just pretended that’s exactly what I was looking for. “Merci beaucoup!” She and her friend had a good giggle as I walked away defeated.

I’ve never done an international race (oh, Canada, I suppose), so this will mostly be my take on how this experience was different. Over 1000 people stood in the start corral and it had a bit of a Leadville 100 feel, drones and all. Everyone was overdressed, mostly trying to show off their really fancy gear I suspect — Yves, a French native, confirmed this. There were hardly any women. I thought the race would kick off any second, but everybody stood there for a full 20 minutes. Instead of the, “Uhh, go I guess, if you want to,” style of a U.S. start, these enormous red flares went off and it was suddenly the running of the bulls!

The initial pace was completely reckless. By mile 15, people were destroyed and I was frustratingly stuck at a bottleneck trying to hike up a short and relatively easy climb. I would be passing people for the rest of the race, wondering what everyone was thinking by going so hard in the beginning.

The terrain was very varied and included paved roads, technical mountains, smooth dirt, grassy meadows, and cobblestone paths. Aside from les bah-bahs and les moo-moos on some countryside farms, there were no animals to be seen. We’d come into these tiny little towns where droves of spectators cheered us on, “Bon courage! Allez allez allez!” Check out the video below to get a sense of the scale of the race and what we ran through.

As Ryan Smith’s UTMB experience warned, the aid station food was super different from stuff I was used to seeing. Avoiding the red wine and stinky Roquefort cheese, I stuck with bananas and this delicious sponge-like sweet bread that looked like Ethiopian injera — wow, aren’t I cultured! I also carried about 2000 calories in my pack from the start and wound up using them all.

People were not very chatty with each other like they can be at races in the U.S. Desiring a little companionship after 10 hours of silence, I thought I’d try to strike up a conversation with some fellow racers. I was immediately reminded of the struggles of learning French, as explained by my fellow ultra runner and favorite executive transvestite comedian, Eddie Izzard. I got to chatting with a few different guys and I was glad to see that the ultra running community is just as friendly and welcoming in France as it is in the U.S.

I hadn’t so much as glanced at the course ahead of time and my watch seemed unreliable up until it died, so I wasn’t sure how far I had left to go. I came into an aid station and overheard someone say that the finish was only 7 or 8 km away. Wonderful! Time to stop taking care of myself and run these last 5-ish miles hard! Turns out they must have meant that the finish was only 7 or 8 km away from the next aid station. After passing dozens of people in my premature finishing kick, I sat on a stone wall for 5 minutes to get my act together. After slugging down some water and eating three packages of Honey Stinger chews, I set off for the final big climb.

There was a really cool aid station at the top and I really had to go to the bathroom, even though there were only 3 miles (allegedly) left in the race. “Excusez-moi. Où sont les toilettes?” The volunteer pointed toward the porta-potties, but there was no toilet paper! I soon returned to announce, “Il n y’a pas d’eau de toilette.” Uncomfortable and sincerely confused looks abounded. I had been asking for water, “d’eau”, all day long and had a slip of the tongue here. Thankfully, “d’eau de toilette” is not a literal translation for “toilet water” but instead translates to “perfume.” Luckily, I pack traveling papers everywhere I go, so I grabbed them out of my pack. Crisis averted. 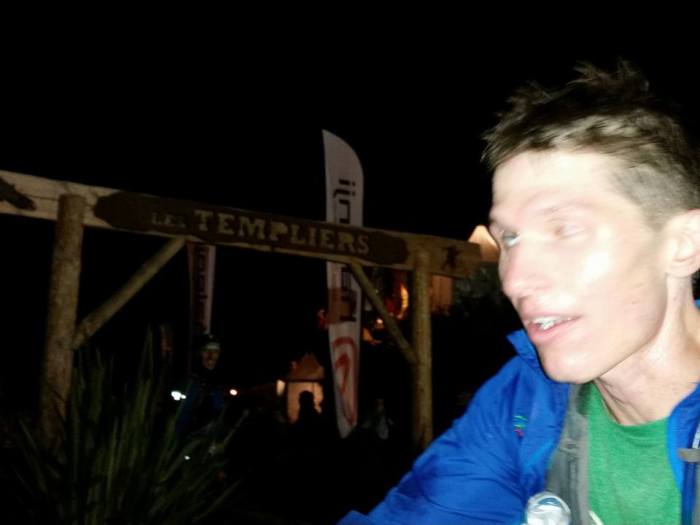 Busting out my Blue Steel pose at the finish line.

I came very close to my goal of finishing before sunset, but I had to run the last 2 miles in the dark. I came into the finish, where Cassie and Yves cheered me in. From there, we went straight to dinner, where the wine and cheese flowed like d’eau de toilette.

The race organization treated Team U.S.A. like rockstars and this treatment was extended to me, a mere roadie for the best rockstar of the bunch. “Merci beaucoup” to the race organization, particularly Sara Tuoni for being so great to us all.